Far from the Madding Crowd | City Bible Forum Plus
Loading...

Far from the Madding Crowd

New film from the classic novel by Thomas Hardy. What is the difference between doing the right thing and following your heart?

Far from the Madding Crowd

The Forum in Sydney
New film from the classic novel by Thomas Hardy. What is the difference between doing the right thing and following your heart? 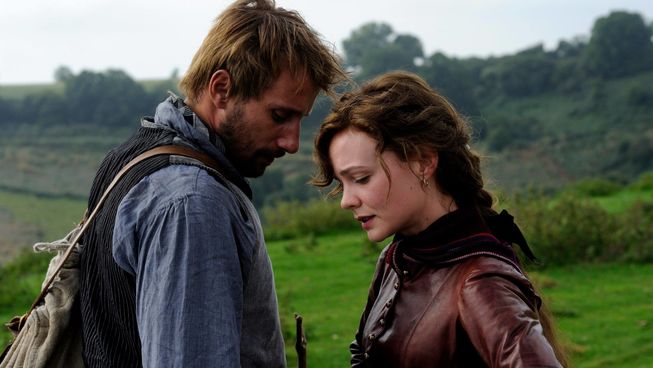 Walking into the cinema...
I have not had the privilege of reading Thomas Hardy’s classic novel, but Far from the Madding Crowd looks to be akin to the stories of Jane Austen. Being one of the only men in the theatre, I wonder if I will be able to connect with this story?

Thomas Hardy derived the title for his literary masterpiece from a Thomas Gray poem, Elegy written in a Country Churchyard. The irony of using Gray's poem as source material is that presented an idealistic noiselessness, while Hardy’s novel is a frenzied and twisted tale of the life of Bathsheba Everdene (Carey Mulligan). She is a strong, independent and beautiful woman who goes from being a penniless orphan to a wealthy heiress. In her new role in society, Miss Everdene must traverse the male-dominated world of agriculture and business. While defining her place in society, she must determine how to respond to the advances of three different suitors: The sheep farmer, Gabriel Oak (Matthias Schoenaerts), the mysterious soldier, Frank Troy (Tom Sturridge), and the older and wealthy landowner, William Boldwood (Michael Sheen). While her life seems charmed, she must come to terms with her failings and determine the right course for her life and for those in her life. Far from the Madding Crowd provides unexpected insights into the heart and mind of a young woman who has been thrust into the realm of power, wealth and love.

The best way to describe Thomas Vinterberg’s (The Hunt) interpretation of Hardy’s novel is 'too much story for a mere two hours.' The Danish director has crafted a beautiful film which portrays a search for an abundant life that is intertwined with an unexpected love quadrangle. The biggest challenge for Vinterberg is how to incorporate the depth of this rich tale into a limited time frame. At times, this caused a loss of continuity in the story, but despite this he delivers a fulfilling product. The lead actors, Mulligan and Schoenaerts, were perfectly cast and added the needed chemistry for their long-suffering relationship. A portrait of an ideal relationship was captured in their journey and remained strong throughout multiple trials. They were splendidly supported by Michael Steen who managed to steal every scene he entered and delivered a magnificent performance as the pitiable and forlorn Boldwood. The weakest casting link is Tom Sturridge, who did not have the needed presence to win the heart of the Miss Everdene. In the end, these were minor weaknesses in a beautiful portrayal of life in the English countryside of the 1870s.

Whether in historical England or in a modern day setting, this story proves that the human condition has been consistent throughout the ages, which allows the film to speak into the hearts of a modern audience. The failings of most of the lead characters allows for an unexpected hero to rise from the tragedies in this frenetic storyline. The heart and conscience of the story is Gabriel Oak, who provides the strength for Bathsheba to continue on through life. He provides an unconditional loyalty that comes at great personal cost, but ultimately does produce a timely reward. He delivers a quiet confidence and provides the integrity that proves to be the backbone of this tale. Within the strengths and frailties of Oak and the supporting characters, we get a rich narrative on the value of faithfulness and integrity that stands the test of time. The true value of this cinematic experience lies in Thomas Hardy's story, but in its condensed visual form it was beautifully satisfying.

Leaving the cinema...
This is the perfect date night film. Far from the Madding Crowd proves an education in what women gain from this film genre. Whatever seemed commonplace or cliched proved to be the very thing the audience desired. The twists and turns add to the humanity of the characters, but in the end there is a desired satisfaction in the relationships portrayed. This goal was achieved, both on and off screen.